The main contest held in Tokyo during November welcomes 151 junior high school students selectively chosen from their respective prefectural preliminaries to test their English oratorical skills against the very best in the country.

During this period, all participants are invited to stay at a traditional Japanese ryokan for three days, providing participants the opportunity to interact with their peers and create new relationships.

We look forward to the participation of interested students, parents, and teachers. 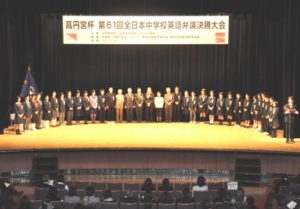 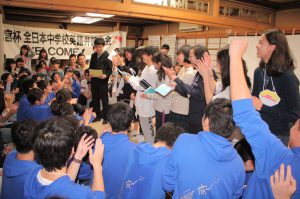 In the spring of 1946, the Japan National Student Association was established with the good graces of the late Prince Takamatsu when the entire country was still reeling from its defeat the previous year. Its main purpose was to educate English to Japanese youth who were to be the future representatives of a new Japan playing an active role in the international community and also help disseminate the English language in an effort to cultivate a better understanding of different cultures and contribute to the development of constructive international relations.

With this purpose in mind, the late Prince Takamatsu bestowed his blessings on the newly established Japan National Student Association. With the Yomiuri Shimbun as its co-host and the support of the prefectural boards of education, the first edition of H.I.H. Prince Takamatsu Trophy All Japan Inter-Middle School English Oratorical Contest was held in 1949.  The inaugural Finals were attended by the present Emperor, then Crown Prince who was a first-year senior high school student. Japan was still under the occupation of the Allied Forces and many Japanese youths were discouraged by their bleak prospects, but the inception of such a contest helped spur many persons’ interests and encouraged young people to pursue bigger dreams. 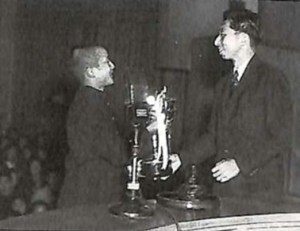 From its inception, the contest gradually grew in participation and currently boasts over 100,000 local school preliminary contestants nationwide, firmly establishing its presence in Japan’s English educational system. Many of our alumni currently play an active role in today’s international community.

In April of 1985, the Japan National Student Association with the full support of the Yomiuri Shimbun, Soroptimist International Tokyo-Azuma, Coca-Cola Japan, Parker Pen Japan (now Newell Brands Japan Ltd.), Akane-kai, Sendai Ikuei Gakuen, Gloria Tourist, etc. renamed itself as the Japan National Student Association Fund (JNSA Fund) and re-established its purpose to nurturing young globally aware talent who were to be the driving force for 21st century Japan by emphasizing the importance of English as the lingua franca of modern society and help dissemination of the English language in an effort to contribute to the development of Japanese culture and constructive international relations.

The late Prince Takamatsu graciously accepted the role of Honorary President of the JNSA Fund and the H.I.H. Prince Takamatsu Trophy All Japan Inter-Middle School English Oratorical Contest since its inception, and was succeeded by Prince and Princess Takamado in 1986.

As the contest welcomed its 51st anniversary, the contest was renamed to H.I.H Prince Takamado Trophy All Japan Inter-Middle School English Oratorical Contest to commemorate the initiation of a new century with the good blessings of the then Honorary President Prince Takamado.

With the passing of Prince Takamado in 1999, the role of Honorary President was subsequently succeeded by Princess Takamado and the name of the contest remains the same as of today. 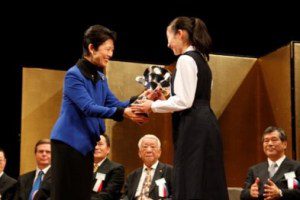